In the early morning Kemet Travel representative will escort you to start your Day Tour to The Sun Temple of Niuserre at Abu Ghurab with your Private Expert English speaking Egyptology guide.

The Sun Temple of Niuserre is one of the best places of Energy in Egypt, this monuments built by Niuserre , the sixth king of the 5th dynasty (2478-2430) BC. , in an area call Abu Ghurab to the north of AbuSir. This Temple was built for the puppose of honoring the God Ra , was not used as a burial place .

After our day tour we will take you to have a local authentic Egyptian lunch in an open restaurant surrounding by palm trees , then back to our hotel.

A few hundred meters to the north of the first sun temple built at Abusir, in a place called Abu Ghurab (an Arabic phrase meaning “Father of Ravens”) about six miles southwest of Cairo, lies the ruins of the second sun temple to have been found and investigated archaeologically to-date. It is one of only two sun temples currently known to have survived, though others were probably built and may yet be discovered. Years ago, before the purpose of Niuserre’s structure was known, it was called the “Pyramid of Righa” by travelers. Excavations were carried out on the complex between 1898 and 1901 by the German archaeological expedition led by Fredrich Wilhelm von Bissing. Ludwig Borchardt, the architect who would later contribute significantly to the archaeological investigation of the neighboring pyramid cemetery in Abusir was entrusted with the task of documenting and processing this discovery. 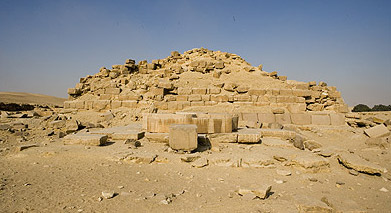 These ruins are those of Niuserre’s sun temple, named “Delight of Re.” Like that of Userkaf, it was composed of three parts, consisting of a valley temple, a causeway and a temple containing an obelisk. Also like Userkaf’s structure, it was not precisely aligned to the cardinal points. Significantly, however, and unlike that of the Userkaf complex, the von Bissing expedition was able to uncover the surrounding ruins of the valley temple. As excavations proceeded, it was demonstrated that the huge stone enclosure wall of a town which had apparently extended far towards the east in the Nile Valley, abutted on the valley temple. Nevertheless, the existence of such a town does not explain the disharmony in the orientation of the valley temple to the cardinal points. 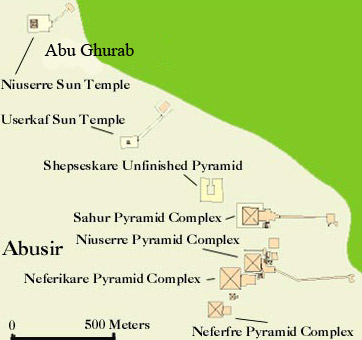 Niuserre’s valley temple differs significantly from that of Userkaf’s sun temple, being simpler in layout, and perhaps better seen as a monumental gateway, similar to contemporary pyramid complexes. On the other hand, the valley temple of Userkaf’s sun temple, which is situated in boggy ground and has never been properly investigated, was more of a temple in its own right. Consisting of a huge structure made of limestone blocks, it had columned porticos on three sides. The main entrance, approached from the east, was adorned with four palm columns of red granite, while the two side entrances on the northwest and southeast each were decorated with only one pair of these columns. 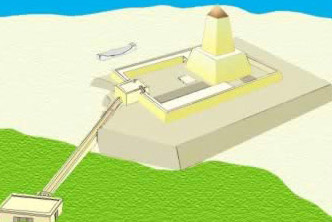 The gateway itself led to a causeway that had to overcome technically demanding obstacles, having to overcome a 16 meter vertical difference over a relatively short distance and also over a very uneven terrain. Like the valley temple, the causeway was also built of limestone blocks. 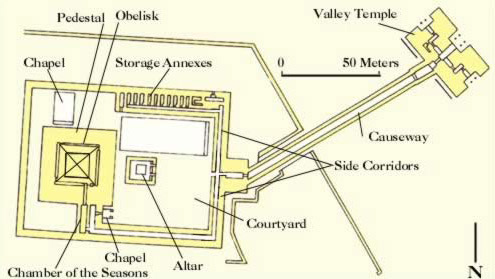 There are no reviews yet.

This site uses cookies. By continuing to browse the site, you are agreeing to our use of cookies.

We may request cookies to be set on your device. We use cookies to let us know when you visit our websites, how you interact with us, to enrich your user experience, and to customize your relationship with our website.

Click on the different category headings to find out more. You can also change some of your preferences. Note that blocking some types of cookies may impact your experience on our websites and the services we are able to offer.
These cookies are strictly necessary to provide you with services available through our website and to use some of its features.

Because these cookies are strictly necessary to deliver the website, you cannot refuse them without impacting how our site functions. You can block or delete them by changing your browser settings and force blocking all cookies on this website.
We also use different external services like Google Webfonts, Google Maps and external Video providers. Since these providers may collect personal data like your IP address we allow you to block them here. Please be aware that this might heavily reduce the functionality and appearance of our site. Changes will take effect once you reload the page.